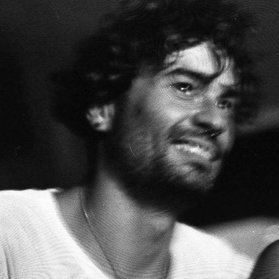 Francesco Palluzzi was born in Tagliacozzo, Italy, in the 1987. He graduated in "Industrial Design" at the University "La Sapienza" of Rome in 2007, and then embark on the two years specialization in painting at Rufa "Rome University of Fine Arts" , has taken the course of postgraduate training in painting at the "Universidad del Pais Vasco" Bilbao ( SP) . He began his career as an assistant to various artists; in spring 2014 he collaborat ed on the exhibition of ' artist Guglielmo Castellito Macro "Contemporary Art Museum of Rome" , in April 2014 the exhibition "Legamenti " atel ier Montez, in whose care the exhibition, in October of the same year he collaborated on design for the Olimpic Winter games in Sochi . In 2015 began collaborating on the implementation of the exhibition "Ostrale015 " in Dresden in July 2015. In May of 2015 it is selected  finalist in the painting competition" LIX Prize Cascella " held in Cortona. In September of the same year he collaborated again with the contemporary art center " Ostrale" in various job positions for the event "kontrovers". October 2015 realizes together with the artist Bill Woodrow and the xylographer Umberto Giovannini the artist' s book "Lost". In february of 2016 design in freelance role different logos for Alessandro Ciglieri s.r.l.s. and in march partecipates in the collective "Chiba" held in the palace Velli in Rome and in February created the cultural association "INSITU" with which he made i n September of the same year the "Faces of passage" for installation Unicredit S.p.A. event "And then we went to see the stars". He is currently working with the architect Daniele Delgrande in the realization and design of architectural timber structure.